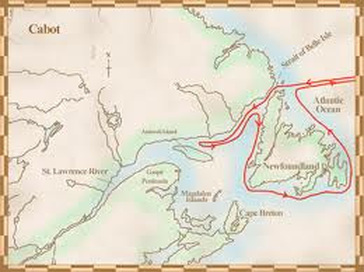 The route of Cabot's second voyage
It was not long after Cabot's first voyage before he was once again ready to sail because in February 1498 he cast off, but this journey would prove more uncertain than the last. As before, Cabot sailed from Port Bristol to return to Northern “Asia” and claim more land. This time Instead of one small ship, Cabot had a small fleet with a total of five ships. One of his ships suffered damages not long after leaving and had to leave the fleet to go to an Irish port for repairs. Cabot and his some three hundred men, meanwhile, sailed across the Atlantic, but landed more south than expected (almost near Maine). From Maine they continued to sail up the coast of North America.

As Cabot and his men continued further and further north the sailing conditions became increasingly difficult. The main problem for the ships was the cold. Ships at the time were only designed for sailing in warmer waters. Ships advanced enough to make the journey Cabot was attempting would not be around for a long time. Icy conditions made continuing almost impossible. It is no surprise though that Cabot’s crew mutinied. Cabot had to abandon his goal of continuing North and comply with his crew. The exact latitude of Cabot and his ship is not known for sure, but from Northern Canada his ships sailed around Greenland, across the Atlantic to Ireland, and on to Port Bristol.

There is no evidence that Cabot ever returned to England. Though it is likely that he did, not all historians are convinced because there was no actual documentation. The only clue historians have about Cabot’s death is that his pension from the king stopped being paid in 1499. The records of John Cabot are scarce and full of uncertainties mainly due to the fact that John Cabot never kept any form of diary or Captain’s log. Had he done this historians could have had definitive answers about aspects of Cabot’s life.
-This quick video gives a great summary of Cabot's discoveries and life http://www.youtube.com/watch?v=olkgIbyMDrg